RSD9 is coming up soon. This is my first experience with an online conference. I expect it will be well worth any extra effort: http://rsd9.org

Posted by Harold Nelson at 9:17 AM No comments:

Posted by Harold Nelson at 6:27 AM No comments:

Chinese edition of The Design Way

Interesting experience last week. Discovered by accident (Amazon advert) that there is a Chinese edition of The Design Way. It has been available for a few years and has sold several thousand copies. Who would have guessed? If by chance anyone has read this version of the book please let me know. I would like to hear what you think of the quality of the translation. The Spanish edition has been delayed by the virus but is still scheduled to be printed. 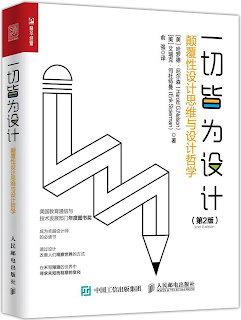 Posted by Harold Nelson at 11:17 AM No comments:

This is an interesting review of a new book on Scientific Method vs Integral Thinking. For me design is the quintessential example of integral thinking. Method seems to be winning over thinking unfortunately.

Posted by Harold Nelson at 3:48 PM No comments:

There has not been a lot of good news in this time of the 'virus' but just as I was getting a little depressed about it all I was introduced to this presentation on David W. Orr by Amelia Stockman, a student and member of the next generation of scholars and practitioners in Australia. She has given me new hope that her generation is getting on with what needs to be done to overcome the mess they have inherited. Thank you Amelia":

https://youtu.be/5Kvj6rMbdU4
Posted by Harold Nelson at 12:36 PM No comments:

Industrial / product designers make stuff for people to buy and use. One of the most successful designers of this type in the 20th Century and now most influential in the 21st Century is Dieter Rams. This is a great video about him and his work:
"Rams is streaming free with optional subtitles in English, German, Italian, Czech, Russian, Korean, Turkish, Japanese, Chinese, Brazilian Portuguese, Spanish, and Swedish.
Hopefully some of Dieter’s philosophy and wisdom can be an inspiration for you during this crisis. #LessButBetter
Watch Rams free now, until April 14: https://www.ohyouprettythings.com/free"

Posted by Harold Nelson at 2:12 PM No comments: