Design's expansion into the 'Invisible'


Recently an excellent article by Tom Fisher, the Dean of the School of Design at the U. Minnesota, titled Design's Invisible Century, provided an exceptional frame for understanding the evolving nature of design. The article makes a contrast with science's 'invisible' century, the 20th Century, when scientist thought they had 'seen' everything and suddenly the sciences of the 'unseen' realms of physics, chemistry, and psychology et. al. exploded into 'view' resulting in a scientific renaissance. The case is made in the article that design is now facing the same sort of renaissance in the 21st Century, in the realms of the 'invisible', as did science in the last century.

Most formalized design fields are defined by their domains of 'visibility' but design is expanding into more 'invisible' domains. An example is design's expansion into other professions such as management. A seminal conference was hosted at Case Western's business school titled 'Managing as Designing' which resulted in the publication of a book by the same name published by Stanford University Press. Another example is the Rotman School of Business in the U. Toronto, which has made a serious commitment to design. Around the world there are university programs combining business and design in the planning or implementation stages.

Design is moving into the domains of public policy, business and military strategy, and other 'invisible' domains of human activity. New forms of designing and new types of designers are emerging as well. Some designers from the 'visible' traditions of design are forming up to 'design behavior' or other interventions into 'unseen' worlds but that of course is dangerous without them making changes in their design practices and character. Ones that are a better fit for the task of making the 'invisible' 'visible'.
Posted by Harold Nelson at 11:34 AM No comments: 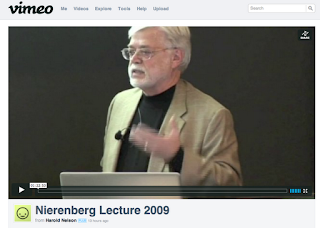 Horst Rittel is one of the seminal residents in my 'Berkeley Bubble'. Recently a friend and colleague sent me an article about ‘double-wickedproblems’. I have become ever more aware of the increasing number of references to ‘wicked problems’ in all forms of media that seem to have missed Rittel’s deeper insights. This brought up the concern I have about the use and miss-use of the term ‘wicked problem’. The term ‘wicked problem’, first introduced by Rittel in West Churchman’s seminars at Berkeley, was in reference to his conceptualization of the impossible challenge of dealing with significant social issues using traditional, rational, ‘problem solving’ methods. 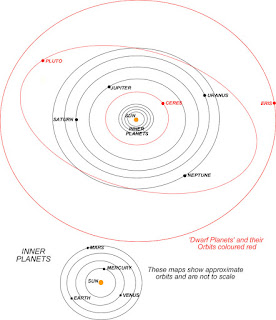 The ‘appearance’ of the solar system is much more complex, convoluted and irregular when viewed from a geocentric viewpoint than when viewed from a heliocentric viewpoint. In the same way, complex issues nested in complex realities—i.e. 'throwness'—‘appear’ dramatically different when viewed through different lenses—for instance a ‘problem solving’ stance versus a 'design' stance. The habit of labeling and viewing nearly every challenge in life as a ‘problem’ has obscured the other possible ‘appearances’ of  ‘throwness’ and has consequently inhibited wise actions on our parts. 'Wicked problems' can be dissolved using a 'design' stance allowing for the possibility of wise actions.
Posted by Harold Nelson at 2:45 PM 5 comments: 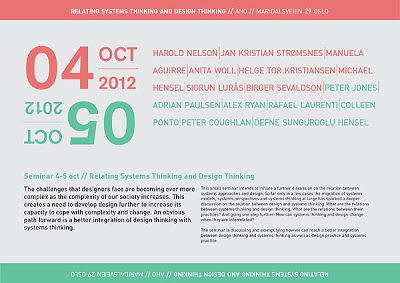 I recently returned from a very successful seminar hosted by the Systems Oriented Design program in the School of Architecture and Design (AHO), Oslo, Norway. The seminar drew together the authors of  chapters to be published in a proposed book edited by Birger Sevaldson (focused on the relationship between systems and design) plus faculty and graduates students at AHO. The hope was that this seminar would be the beginning of an ongoing dialogue among scholars, practitioners and students from around the world on the relationship between systems thinking and design thinking.
Posted by Harold Nelson at 10:30 AM No comments: