The Design of Fire

Humans did not discover fire—they designed it. The wheel was not something our ancestors merely stumbled over in a stroke of good luck; it, too, was designed. The habit of labeling significant human achievements as ‘discoveries’, rather than ‘designs’, dis­closes a critical bias in our Western tradition where observation dominates imagination.

There is still a wide chasm between what people believe about the genesis of the ‘real’ world and people who make ‘real’ things—i.e. designers.  It is still generally accepted and promoted that traditional design fields delimit the reach and grasp of human making. It is also true that 'invention' is commonly used to describe the means by which things are created while 'discover' is still used to define human agency in the real world more often than not.

But there seems to be movement, maybe even progress, towards grasping a fuller appreciation of the deep and profound effect of human agency on the creation of the real world—i.e. design. A recent article in Aeon on the evolving human relationship with fire points to a first step away from ‘discovering’ towards ‘making’ as the instrumental approach that causes the real world to be what it is unnaturally. Is this a first step on a path that can lead eventually to the ‘discovery’ of ‘design’? 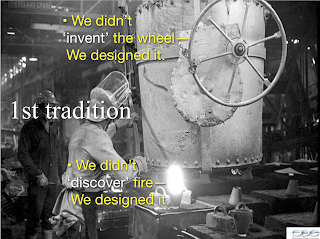