Breadth AND Depth – The Interactive Space for Leadership

There are ongoing discussions about the value of generalists versus specialists. The discussions are long running, only occasionally morphing into discussions championing people who are both competent generalists and able specialists—what businesses calls ‘T’ people. However the discussions quickly self-correct back to the debate between the value of generalization versus specialization. ‘T’ people display competency in both breadth and depth of knowledge and skills—but interest in them primarily remains academic. You don’t actually see many advertisements and hiring campaigns for people with ‘T’ skills but the rhetoric declaiming the value of combining such skills remains popular.

‘T’ people have been occasional objects of interest in government and the military, but nothing serious enough to actually cause changes to be made to accommodate them. Agencies and military branches remain primarily committed to siloed organizational designs. Structured differentiation and specialization remain the rule. For example, when there is serious command and control work to be done subject matter experts are sought rather than the advice of generalists.

Despite education straying occasionally into generalist territory, it remains highly structured in disciplinary tranches. There is only an occasional interdisciplinary or multidisciplinary foray into pedagogical redesign. Consumers of education continue to prefer siloed structure it seems. “Stay in your swim lane” is the unofficial motto for advice to self and others.

The debate between the value of a specialized or generalized competency should not to be confused with interdisciplinary or multidisciplinary educational designs. That is something different altogether. Combining categories is not the same as putting distinct understanding together.

Rather than debating whether specialization is better than generalization, or vice versa, or even whether both ought to be utilized together, there is a third conversation that needs to be taking place. This conversation is important because it affects how creativity, innovation, enterprise and leadership are enacted in the world. This conversation focuses on the conjunction of depth-of-knowledge and breadth-of-knowledge—specialization and generalization. It is not about knowledge aggregation but about a high order synthesis of understanding. It is not about aggregating data and information for the purpose of describing and explaining reality—it is about inquiry for prudent action followed by wise action in the real world—the leader’s ultimate challenge.

To help show what this looks like we will cautiously borrow the graphic structure of a schema from the mathematicians to be used as abstract ordering systems. We can relate specialization to generalization—depth and breadth—using the familiar two axis coordinating system. But rather than forming a coordinate graph—as would be the case in mathematics—we will use the graph schema to bring focus to the conceptual space defined and enclosed by the two scalars of breadth-of- knowledge and depth-of-knowledge (see Fig. 1). This is the space where the interactions appear that relate, link, connect and bond a diversity of types of knowledge. 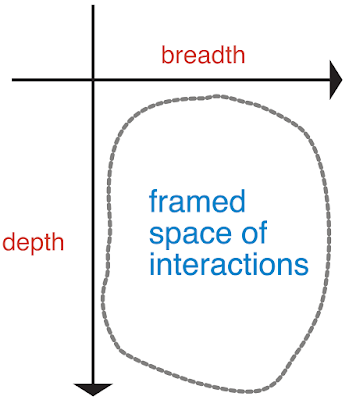 Rational inquiry based on depth-of-knowledge and breadth-of-knowledge—specialization and generalization—can be presented in the context of traditional academic disciplines, professional fields and their specializations (see Fig. 2). Although a familiar example, it is not a sufficient exemplar for the challenges facing modern day leaders. A good leader’s appreciation of, and need for the combination and integration of, breadth-of-knowledge and depth-of-knowledge far exceeds the limits of traditional academic categories and taxonomies that may suffice for managers and administrators but not for 21stcentury leadership. 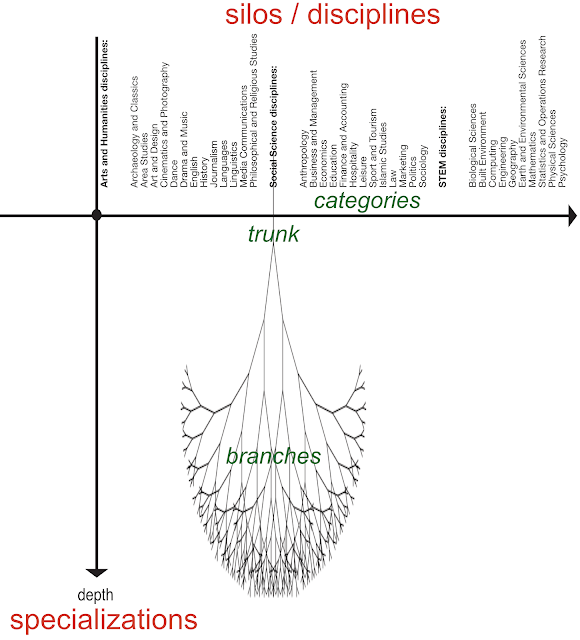 Fig. 2   Breadth and Depth of Knowledge

The unflattering division between people who are generalists and those who are specialists is often characterized as the difference between shallow dilettantes and out-of-touch specialists. But in actuality there are people who are generalists—polymaths—who have a firm grasp of a wide spectrum of knowledge that extends across traditional categories of knowledge taping into varying levels of depth. There are specialists who have a grasp of the details, particulars and permutations within a narrow range of inquiry that provide fundamental insights into the building blocks of reality. Both are valuable to the human enterprise (see Fig. 3). However there is something even more valuable when the differences are transcended by a systemic conjunction of the two. 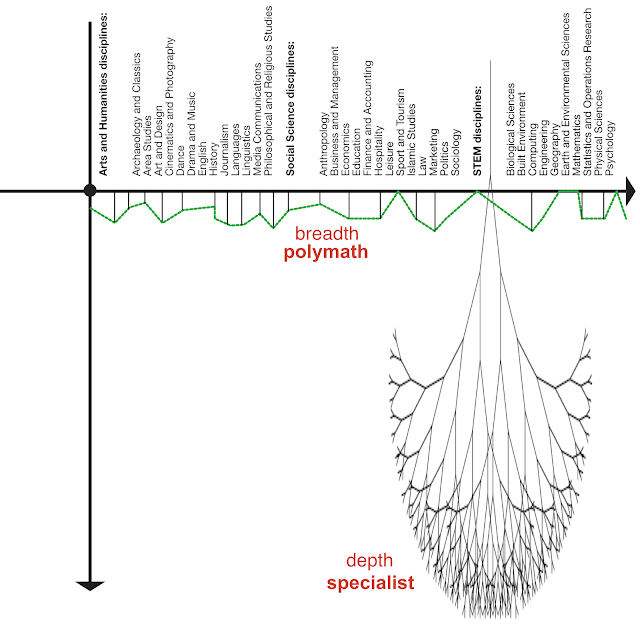 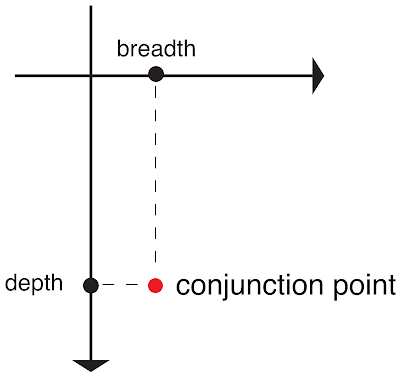 The next level of cognitive ability in exceptional leaders is the facility to look for and see, or create, relationships between compounds-of-knowledge that are missing, broken or securely in place (see Fig. 5). 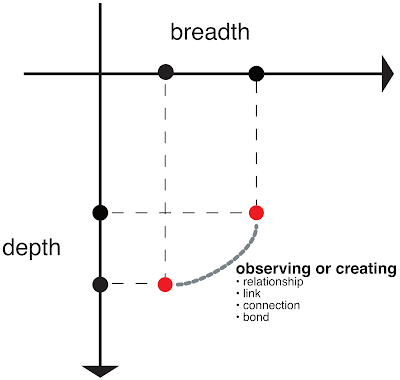 This process of ‘connecting the dots’ is a transitional activity for leaders and not the end point as is the case for big data consumers (see Fig. 6) where the point is to discover patterns in the interactions of data or information. Big data becomes useful when a pattern reveals itself among all the interconnections. The purposes for big data are assumed and patterns are discovered in the connected dots. Intentionally choosing how to connect dots to create patterns is a very different challenge for leaders. Purpose is not fully disclosed in the beginning but emerges by design through intention. Patterns are formed on purpose and not merely discovered. 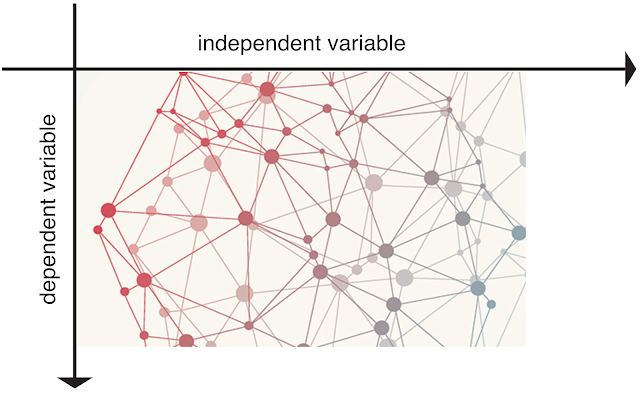 The pattern or patterns that emerge, through the intentionality of the leaders who are creating desired connections between knowledge compounds, are complex and emergent. As a consequence there is a very different quality to the patterns themselves because they are not deterministic but the result of human intention; there are no ‘correct’ patterns, only ‘desired’ ones. Additionally, they are different in quality and kind because different perspectives are also considered in the formulation of knowledge compounds—a third axis (see Fig. 7). 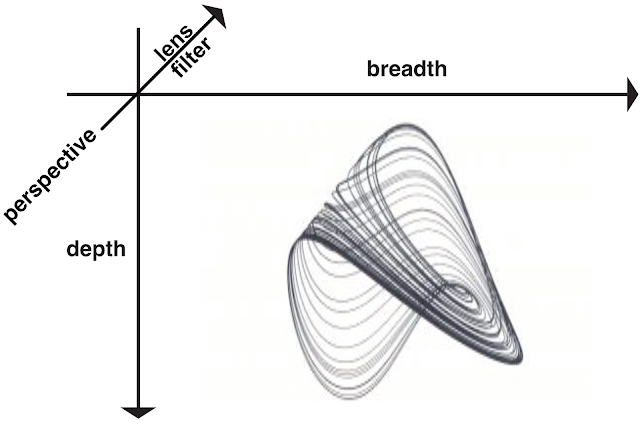 Leaders, as they relate differentiated understandings, weave a pattern from which an emergent particular pattern begins to make itself visible (see Fig. 8). A dense, rich, substantive understanding that goes beyond discrete understandings or knowledge compositions, emerges from the influence of an attractor pattern—an aspiration—that affects and is effected by leadership’s inquiry. An ultimate particular insight may suddenly make itself known or may reveal itself in bursts of contributor insight over time. The insight as a whole is essential for taking action while maintaining the direction and purpose of change—assuring wise action. 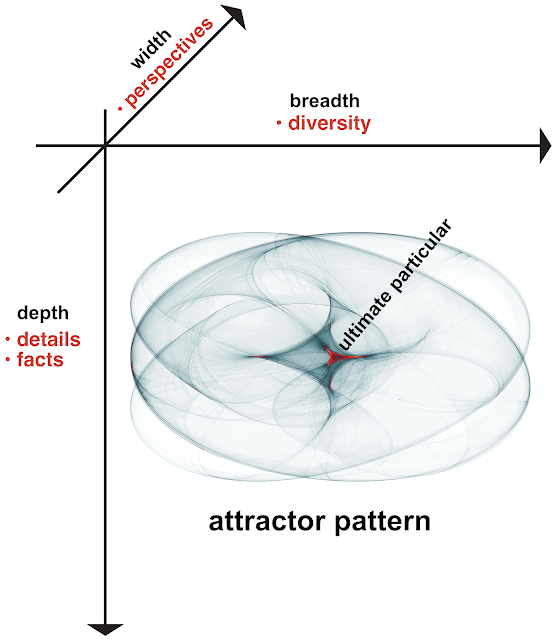 You may have recognized this space of interactions as the same as that used by good designers. This is the reason good leaders are also good designers.